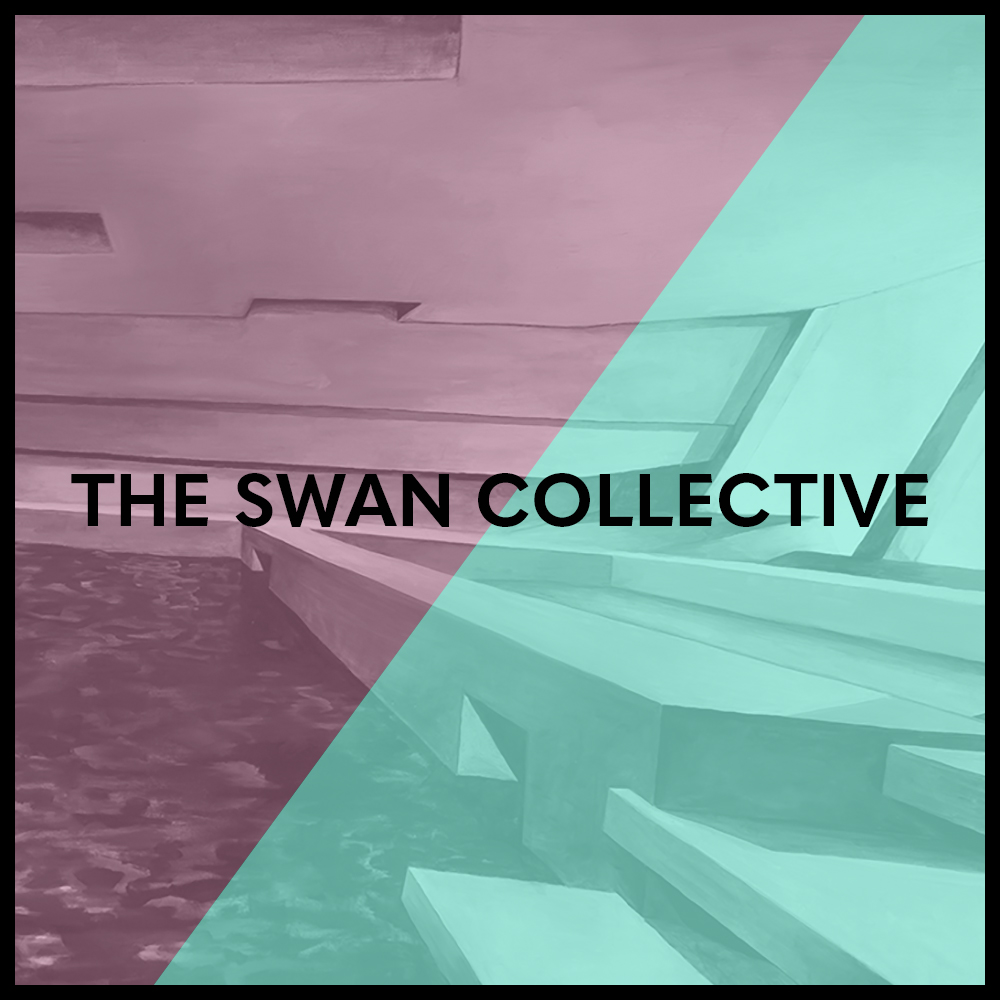 The large-format acrylic painting Cutting Sunday by Felix Kraus is part of a whole series of contemporary interiors, reduced in colour and sometimes so boldly shaped in their composition that they recall the artistic cosmos of M. C. Escher. Kraus is always showing only a part of a world, which is deserted of humans and furniture alike, and in which sharp-edged concrete, shivering water surfaces and intentionally set light sources evoke a Kafka-like mood. The skilful naturalistic reproduction of the only supposedly really existing interiors, stands in a long art-historical tradition. In the work of
media artist Felix Kraus, who often appears as an incarnation of his own Swan Collective, it is however not the end result, but rather the starting point of a multi-layered creative process using digital tools. Recently this process culminated in the virtual reality work Here we are from 2018: elements of his analogue paintings, which are simultaneously restricting and spacious, are condensed into an
appealing and disturbing 360° interior architecture, in which you have to find your way around – a casual yet convincing voice from the off does not necessarily contribute to finding orientation.
The voice suggests that you are nothing more than the intellectual creation of the speaker, an artificial intelligence. The art of deception is operated on a high literary-philosophical level – the virtual space mutates into Plato’s cave.

It is difficult to adequately represent movements, and, as a result, the temporal dimension in painting – The Act Descending a Staircase No. 2 by Marcel Duchamp from 1912 is probably the most famous testimony to an artistic examination of this problem: the painter dismembers the movement into static sequences, which are simultaneously present on the canvas. Just over one hundred years later, digital technology offers new possibilities: using Augmented Reality, Felix Kraus extends his acrylic painting Cutting Sunday and adds a temporal layer by superimposing the interior architecture with light and shadow movements / animations.

In order to achieve this effect Felix Kraus recreated one of his paintings as a 3D scene with the help of image-based modelling in Cinema4D. After importing it to Unity, this scene now appears whenever users scan his painting with the matching AR application. The almost ghostly effect of lights and shadows moving over the walls of the 3D scene is achieved by using a Unity shader that simulates the movements of light sources outside of the rooms. These light sources then either lighten up or darken the respective textures of the inner walls.

Felix Kraus is the initiator of the Swan Collective and studied at the Academy of Fine Arts in Munich and the Karlsruhe School of Design. He received the scholarship of the Studienstiftung des deutschen Volkes. The Swan Collective mixes different techniques such as virtual and augmented reality, painting, paper embossing, literature and performance.
Works of the collective have been exhibited in institutions such as the Stuttgart Art Museum, the Centro Cultural Banco do Brasil in São Paulo, W139 in Amsterdam, the Kunstmuseum Aalen,
the Kunsthalle Schweinfurt or the Goethe Institut in Toronto. In addition, Felix Kraus has participated in various screenings and exhibitions as a member of the Swan Collective, including London, Berlin,
Hamburg, Bolzano, Athens and Tokyo. He was awarded the first prize for his films at the LOOP Festival Barcelona and the Ludwigsburg Film Festival.