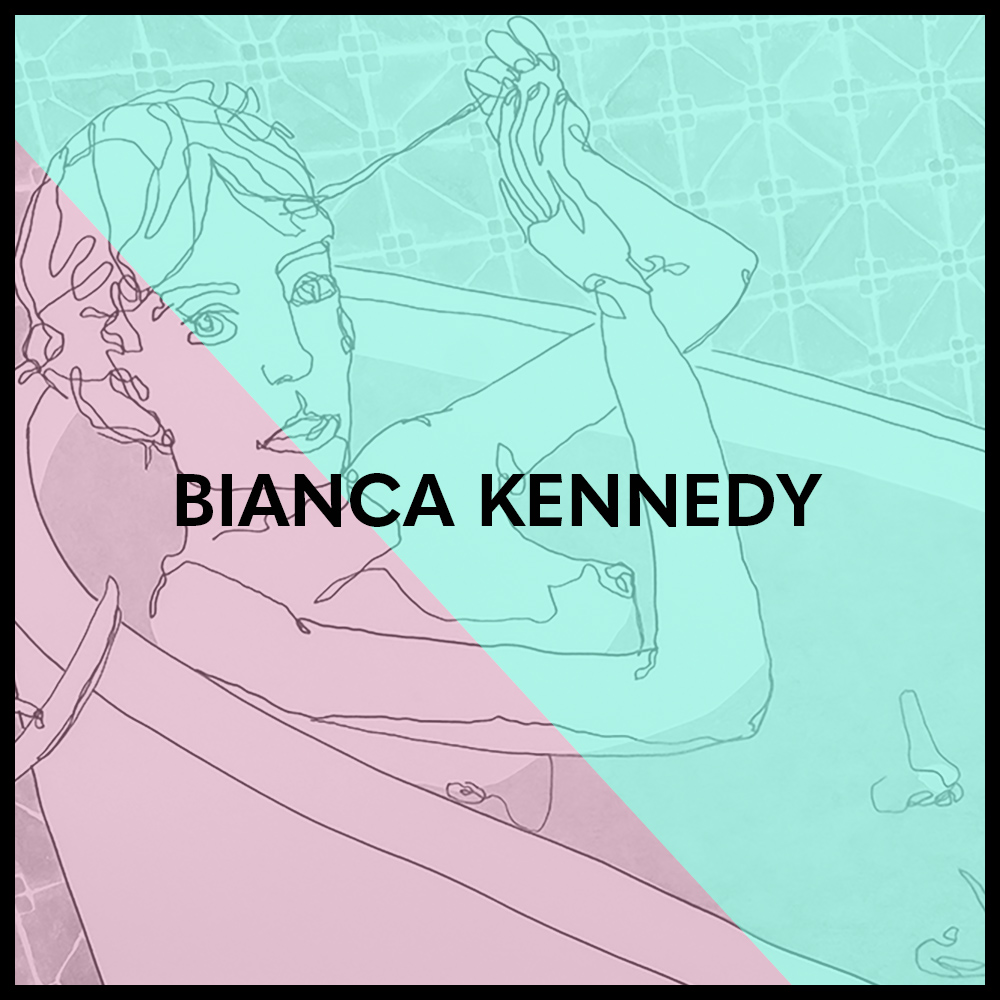 SWIMMING WITH THE LOVERS

The bathtub is a central theme in Bianca Kennedy’s œuvre: in 2016, she began a thorough exploration of this intimate place of human existence in film, and in the following years she created a comprehensive series of coloured drawings based on a kaleidoscope of found bathing scenes. On them, the tub is never empty, but always filled with liquid and more or less lively populated by one or more characters in diverse situations and of different ages. The true life out there is now and then reflected, reduced to a few square meters, bundled, bared, dissolved and heated in the tub water. Whether boredom or passion: both are intensified in the tub.

Drawings in the same style also form the basis of Kennedy’s virtual reality work VR all in this together of 2018, in which she catapults the viewer into the tiled retreat of two self-absorbed bathers and exposes him/her to a truly emotional roller coaster: on the one hand you can enjoy the scene of peaceful intimacy accompanied by the sound of the softly splashing tubwater, on the other hand you can not help but feel as an intruder or voyeur, caught in a spectacle not intended for one’s own perception.

In contrast, the bather on the artist’s augmented drawing of 2019 looks out of the picture: Relaxed she twirls a strand of hair between her fingers and makes eye contact, as if she were familiar with her real counterpart. Six differently shaped noses in the washed limonade-orange bathing water render the scene surreal and at the same time more sensuous, but inevitably raise the question, whose olfactory organs the female nude allows near her, and why – or are they even representations of our own sense of smell creeping up on the woman?

The augmented reality app INKA, which is linked to the drawing, continues the game of closeness and distance: Just when you believed yourself to be only a few steps away from the image of the bathing figure,
the application pampers a whole forest of potted paper plants behind a closed door, their spatial dimension moving you far away from the scene.

An additional element on the right hand side is a room corner that continues the waldmeister-green bathroom tiling and shows a washbasin, bathrobe and towel. And that’s not all: The face of the protagonist is
suddenly distorted into a one-eyed grin, which evokes an additional level of (emotional) distance through its deterrent effect. All displayed elements are analogue drawings, but the digital augmented reality technology
allows their spatial arrangement and a playful interaction: You can remove almost all components of the extended reality by simply touching the screen accompanied by a clear splash sound – only the room corner
stays persistently. Each tap also leads to another surreal metamorphosis of the protagonist, with her familiar face reappearing only occasionally, like an ephemeral vision.

For the augmentation of Swimming with the lovers, Bianca Kennedy separated her ideas into useful subtasks, enabling a structured and efficient approach. Parallel to the actual implementation, this enabled the deepening into individual subareas of the development of augmented reality applications, and gave the artist the knowledge and the necessary tools to independently realize similar projects in the future. One of the key points of her AR work was the interaction as different events are triggered when touching the smartphone screen. In implementation, this required various sorts of queries in the program, for instance where the screen has been touched, whether it is a single click etc. Likewise, further code is needed if the touches should be tested on the computer during development. To simplify all this, the tool Lean Touch was imported into the project, which already handles many of the basic queries internally.

Bianca Kennedy studied Fine Arts at the Academy of Fine Arts in Munich, where she graduated as Meisterschülerin from the class of Professor Klaus vom Bruch. Scholarships have taken her to North America, Barcelona, Athens and Tokyo. Her animations, drawings and site-specific installations have been exhibited at the Kunstverein München, the Centro Cultural Banco do Brasil in São Paulo, the C-Gallery Milan and at the Colombo Art Biennale in Sri Lanka. In addition to analytical stop-motion animations, in which Bianca Kennedy reveals human abysses, the artist regularly works on photo and drawing series for which she stages her own spatial room-models.